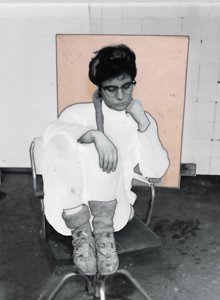 Lena Eliasson Ewald commenced working as an artist in 1988 after studying Chemistry and The Theory History of Fine Arts. She debuted in the 1980s and her first solo exhibition took place at Galley Bergman, Stockholm in 1993.

Her early work as a painter was complex, expansive and monumental oil paintings. However, around 1997 the work have an emphasis on an abstract language. At the same time the quality of light and its presence in the painting became increasingly important. During the first decade of the 2000's she developed a calligraphic and immediate expression in her artwork.

Lena Eliasson Ewald’s artwork is well represented in public institutions. Early assignments included monumental art in exclusive homes and offices within the Swedish business community. These missions were carried out in collaboration with art galleries in Stockholm, Malmö, Umeå and Bergen, Norway.